Alright, I guess the illegal immigrants can stay

They end up paying taxes under fraudulent SS #'s, so they have no intention of ever filing for a return or collecting Social Security. Great! That's the only way there will ever be any money left in Social Security by the time I'm eligible to collect it.
Posted by HoopyFrood42 at 11:54 PM No comments:

Somehow all my local keywords and feeds missed this one. I stumbled upon it from Dvorak.org/blog (everyone take a drink now). I wonder if the neighbors would be upset if I offered to put this in my yard. Do you think this would clash with my 1200 sq ft house on a small dead end street?
Posted by HoopyFrood42 at 5:59 PM No comments:

They can't figure out why fewer people are dying in Massachusetts (unless you fall)? Because they're all LEAVING! Everyone retires to "God's waiting room" in FL. The gravity is a little less there because the world "bulges" a little in the middle which places the equator a little further away from the pull of gravity. So those falls aren't as devastating. Okay, I'm stretching there. But seriously, with the economy in the shape it's in, particularly in Mass., the media has been talking about massive outflows of people and businesses from this state for a few years now. 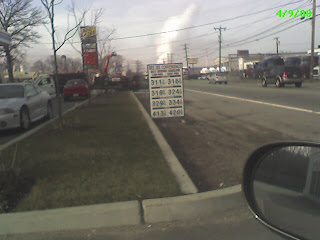 I thought this was illegal in Massachusetts. I've been driving by BeeZee's on Rte 20 the past week or so and noticed this sign. You can't really see it too well in the picture but it has a separate price listed for cash or for credit card transactions. I thought there was a law in Massachusetts that gas stations couldn't charge different prices for cash or credit transactions.

I mean, in this market I can understand why they would want to, but still . . .
Posted by HoopyFrood42 at 1:31 PM No comments:

I was just watching a Chris Pirillo video podcast that was talking about software piracy - how it's not right. If someone worked hard to produce that software it's not right for someone to steal it. They offered it out there for what they thought it was worth. If you don't agree that it's worth that much, don't buy it. Use something else. There's a good chance that there's a free/open source alternative. If it's overpriced the market will not bear it - or so the theory goes.

He compared it to buying/stealing a car. But that is a bad analogy. A car is a physical object. It takes physical parts to manufacture it. It costs basically twice as much to make two cars as it does one. Conversely, it costs roughly the same to sell one computer program as it does to sell a million (minus middle man expenses).

Now when it comes to music it costs almost exactly the same to sell one MP3 as it does to sell a million (minus negligible bandwidth costs). And now thanks to the long tail of digital media, record companies can make money on back catalog that previously wasn't worthwhile to re-print. Throw it on a server. If someone wants to buy it, that's 99 cents you made that you wouldn't have had before. Money that was left on the table until now - and it's millions! Ask Apple.

But it's the part about charging what you think it's worth that kind of caught my ear. The music industry doesn't think like that. They're used to being in a physical object market and aren't adjusting well to this digital market.

So I'm thinking of a model that adjusts to the old marketing curve - kinda like they do with electronics now. When a new gadget first comes out the early adopters pay a premium. Of course in this instance it
's to recoup the costs of R&D etc. Then when/if it hits the mass market then you can drop the price a little and sell more units to the general public.

That's the reverse of what they're doing with a lot of CD's and DVD's. They have them on sale the first week, presumably to boost chart numbers. Then it goes to the regular over-price. But who the hell pays attention to charts anymore. Everything is a niche. The long tail economy on the web is fragmenting the music industry. It used to be the top 100 artists selling 1,000,000 records. Now there is more money made on the 1,000,000 bottom selling artists selling 100 records. The math may be a little off, but the point is in there somewhere.

So how about if we had a model in place for songs where you sell the song the first week or month for $1 then it drops a little, then a little more. Your 1,000 die-hard fans that Jonathan Coulton and Wil Wheaton talked about that would buy anything you make - and pay a premium for it - they'll buy it up. Then if they talk about it enough and it catches on you can lower the price to entice the second tier crowd. To me this seems to solve a problem of money left on the table. If there's a guy that kinda likes my song but isn't going to risk his buck, but would buy it if it were trivially priced at 5 cents or something ridiculous, why shouldn't I collect those nickels?

Or would it even be worth it to say that I'll give the song away for free after making that $10,000. If I've got a good enough audience that likes me and wants other people to find me they will help me get to that $10,000. And then when it's free even more people are likely to download it and get introduced to me. And I've gotten what I wanted out of the song.

Anyhow, just something I had percolating around in my head and had to write it out to see if it made any sense at all.
Posted by HoopyFrood42 at 8:00 AM 2 comments: